Baccarat is one of the most noticeable games in a land-based casino. The baccarat table is characterized by smartly dressed gamblers surrounding a table that is separated from the rest of the casino by a rope. The game has a prestigious reputation, played by wealthy people on tables with high minimum bets. You and other prolific gamblers are attracted by the fact that baccarat offers some of the best player odds in the casino, and what it lacks in pure skill is made up for by odds as low as 1.07%.

The game became popular in casinos around the world, and that popularity has translated into the online version. As with blackjack, the simplicity of the game allowed it to be played simultaneously online with little delay between turns.

The game itself may be played by up to 12 or fourteen players. Actual play is very simple. The dealer deals the cards, involving two under the “shoe” (the banker’s hand), and two to the player with the highest bet (the player’s hand). By this time the players have already placed their bets, either on player, banker or tie. The card values are:

Depending on the final values, the dealer may request a third card to be dealt to each hand, thus providing a different final result. The casino pays out to those who have correctly backed the player, the dealer, or the tie. Player and dealer pay out at evens, while a tie usually pays out at odds of 8-1.

In addition, when the banker wins he pays out at evens minus a 5% commission. This commission is not paid out as the game proceeds since this would slow down the game unbearably. Instead, they keep track of commissions owed to each player and pay the resulting commission at the end of the shoe.

Outstanding commissions are also collected mid-shoe if a player decides to leave the table prior to completion. Obviously this does not affect the play of the game online, as commissions are dealt with automatically in real-time on the server, as the game proceeds.

As mentioned, baccarat offers one of the best house edges in the casino, whether it is and online casino or a land-based casino. With the exception of the tie bet, the house edge is very low compared to other games.

The house edge is explained as follows:

A common feature of baccarat tables is the scorecard. Many players use scorecards and pencils in order to see what cards have gone before, and therefore are attempting to use a type of card counting. However, for most, it is simply a case of betting on the bank time after time. After all, in real terms the player is expected to lose, on average, 1.06% of their money as opposed to 1.24% when betting consistently on the player and 14.36% when betting on the tie.

There is a long-winded description of card counting available on the web. The description, discusses basically how card counting is possible in baccarat. However, it sums itself up at the end by proving that in order to be effective, card counting would mean only gambling once in every 475 hands. 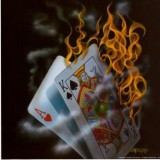